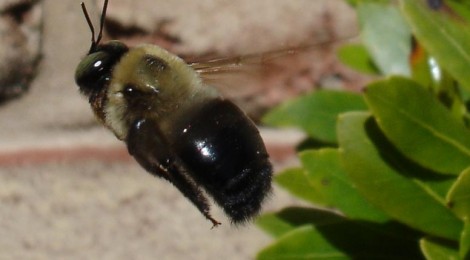 Created not aerodynamically fit to fly?

The heavens declare the glory of God;And the firmament shows His handiwork.2 Day unto day utters speech,And night unto night reveals knowledge.3 There is no speech nor languageWhere their voice is not heard.4 Their line[a] has gone out through all the earth,And their words to the end of the world.    Psalms 19

Is God telling us something through His creation? Are we listening? Can we hear it? Can evolution conjecture working at random chaotic entropy level come up with that design? Good thing is that God did not have it copy righted. Do you know that all of human designs are all copied from God’s creation? Yes, even the roof on your house.

NASA has invested enormous amount of time and money studying the design of bumble bee wings. This is what they found

Bumblebee is the only insect with a NACA 64-series airfoil

Even with that findings, so far, still no one is able to duplicate that design in actual application. That’s only for the amazing bumblebee. How about the unfathomable designs in 1,740,329 other species . . .Evolution?

← Snow Flakes
A Tribute to Mike →