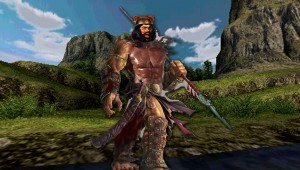 Genesis 6:1-4  2 the sons of God saw that the daughters of man were attractive. And they took as their wives any they chose. 3 Then the Lord said, “My Spirit shall not abide in[a] man forever, for he is flesh: his days shall be 120 years.” 4 The Nephilim[b] were on the earth in those days, and also afterward, when the sons of God came in to the daughters of man and they bore children to them. These were the mighty men who were of old, the men of renown.

There are two popular views on the identity of the “sons of God” :

Moreover the Targums and the Rabbinic literature are unanimous in viewing the ‘sons of God’ as human beings. Targum Onkelos on Genesis 6:2and 4 interpreted it as ‘sons of princes’ or “great men”, and Targum Pseudo-Jonathan has the same view. Targum Neofiti has “sons of the Judges” in both verses.

In the account of creation in Gen 1, God created all living things and gave them the ability to reproduce according to their kind. In other words God programed and stored genetic information “DNA” in living things so that they can only reproduce or pro-create according to their kind. We know that only God can create ex-nihilo. We also know that although angels can make themselves visible to human, touch and move physical object and tamper with physical laws of nature, they simply cannot create a human body with sperm cell containing “Y” chromosomes ex-nihilo to pro-create a male offspring.

Demonic possession can only affect the possessed individual (Mark 5) . Even if a child is born by the possessed, the resulting child will not be born possessed. A fallen angel can not procreate another fallen angel. Mutation is a physical phenomena and can be triggered by physical elements. When Adam sinned, God cursed the creation Romans 8:20 and that started the engine of mutation.

Gen 2 :16 – 17
16 And the Lord God commanded the man, saying, “You may surely eat of every tree of the garden, 17 but of the tree of the knowledge of good and evil you shall not eat, for in the day that you eat[d] of it you shall surely die.”

Romans 5:12
12 Therefore, just as sin entered the world through one man, and death through sin, and in this way death came to all people, because all sinned—

Romans 8-21
19 For the creation waits with eager longing for the revealing of the sons of God. 20 For the creation was subjected to futility, not willingly, but because of him who subjected it, in hope 21 that the creation itself will be set free from its bondage to corruption and obtain the freedom of the glory of the children of God.

Galatians 6 :8
8 For the one who sows to his own flesh will from the flesh reap corruption, …

Physical death occurred right after the fall. Although the body is still functioning but the process of mutation has already been triggered. Individual body cells began to die (which may be apoptotic, necrotic, autophagic or associated with mitosis).  It means death is a process – to some it takes years, others – days. Clinical death (what we meant when we say death – the final state of physical death) occurred when the remaining healthy cells in a body can no longer sustain the continual function of the whole.

A gene mutation is a permanent alteration in the DNA sequence that makes up a gene, such that the sequence differs from what was originally designed to function at creation. Mutations range in size; they can affect anywhere from a single DNA building block (base pair) to a large segment of a chromosome that includes multiple genes. And when these DNA malfunction, it leads to all kinds of disorders, diseases and ultimately clinical death.

Gene mutations can be classified in two major ways:

Hereditary mutations are inherited from a parent and are present throughout a person’s life in virtually every cell in the body. These mutations are also called germline mutations because they are present in the parent’s egg or sperm cells, which are also called germ cells. When an egg and a sperm cell unite, the resulting fertilized egg cell receives DNA from both parents. If this DNA has a mutation, the child that grows from the fertilized egg will have the mutation in each of his or her cells.

Acquired (or somatic) mutations occur at some time during a person’s life and are present only in certain cells, not in every cell in the body. These changes can be caused by environmental factors such as ultraviolet radiation from the sun etc., or can occur if an error is made as DNA copies itself during cell division.

An international research team, spearheaded by scientists from the London School of Medicine and Dentistry, has identified the genetic mutation responsible for a disease known as “gigantism” or acromegaly.

The results of the study – conducted, among others, by the Paleogenetics Group of the Institute of Anthropology at Johannes Gutenberg University Mainz, Germany – were recently published in the renowned New England Journal of Medicine. It is hoped that these will help in the treatment of patients suffering from acromegaly.

National Institute of Health (NIH) researchers also link chromosome region to gigantism Duplication of gene on X chromosome appears to cause excessive growth. Scientists determined the gene most likely responsible for gigantism was GPR101.The gene duplication that causes gigantism results in a malfunctioning pituitary, the pea-sized gland that produces growth hormones. Researchers found activity of GPR101 was up to 1,000 times stronger than normal in children with enlarged and overactive pituitary glands.

Numbers 25: 1-5
1 While Israel lived in Shittim, the people began to whore with the daughters of Moab. 2 These invited the people to the sacrifices of their gods, and the people ate and bowed down to their gods. 3 So Israel yoked himself to Baal of Peor. And the anger of the Lord was kindled against Israel. 4 And the Lord said to Moses, “Take all the chiefs of the people and hang them in the sun before the Lord, that the fierce anger of the Lord may turn away from Israel.” 5 And Moses said to the judges of Israel, “Each of you kill those of his men who have yoked themselves to Baal of Peor.”

2 Corinthians 6:14
Do not be yoked together with unbelievers. For what do righteousness and wickedness have in common? Or what fellowship can light have with darkness?

Since male has XY chromosomes and female has XX chromosomes, then only  “daughters of men” with XX chromosomes according to above study either descendants of Cain or other daughters of Adam have their genes mutated to manifest gigantism when descendants of Seth (chosen one in place of Abel) went into them and defiled the lineage. There are times when a particular trait of chromosomes lay dormant and becomes active again in subsequent generations. This explains why gigantism showed up again in Anak (Joshua’s time) and some of his descendants (David’s time) after the flood. One of Noah’s daughter in law (possibly Japeth’s or Ham’s wife)  must have been carrying the mutated gene, a descendant of “daughters of men”. Taking note that all other descendants of Seth (Gen 5:7) living at the time of the flood were destroyed in the flood except for Noah and his two sons. If there were 10 descendants of Seth besides Noah and his sons that were righteous God would not have sent the flood (Gen 18:32). It was During Seth time when people begun to call upon the name of the Lord and probably were called the sons of God. (John 1:12)

Both views have Scriptural support, but in view of new information coming out from recent discovery in genetic science, It is more plausible to hold that the “sons of God” were human and not angels. Not that science dictates the conclusion but it is taking into consideration that God also speaks through His creation (Ps 19). Science only affirms and does not confirm.

← Message of Hope….. by Bob Schneider
Exploring Noah’s Ark – What do you think The Ark Looked like? →