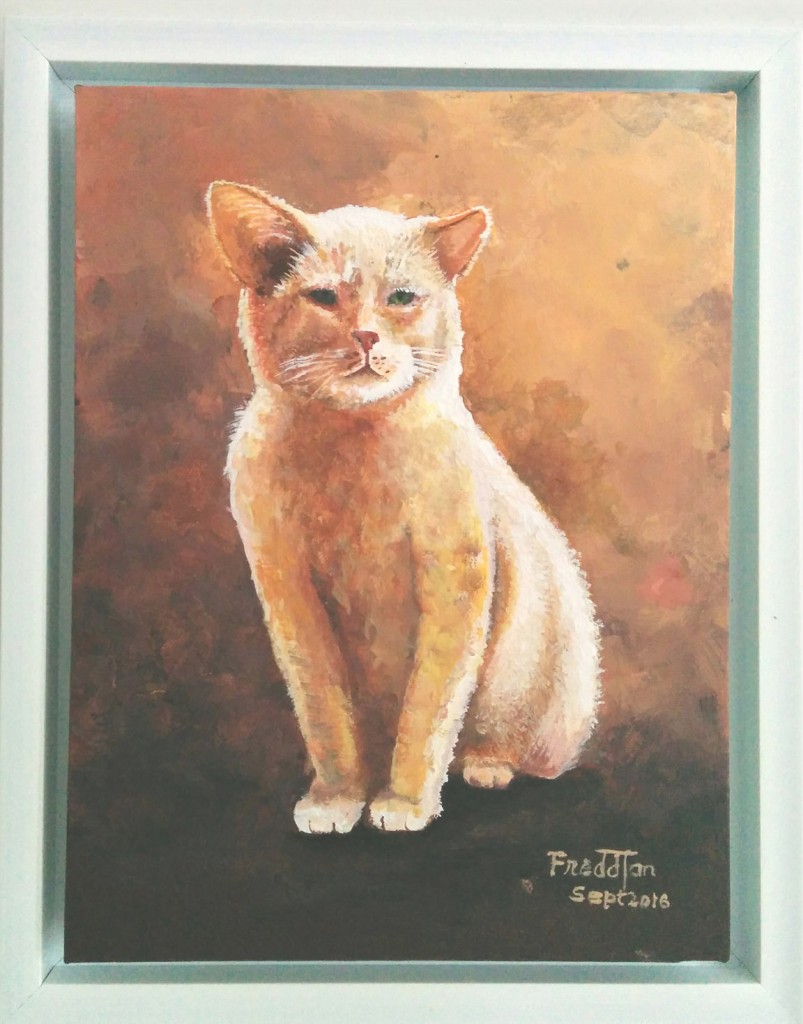 My daughter’s birthday is coming up. I don’t know what to give her. Tech toys sounded great but it really has no lasting value. I wanted to give her something that she really likes. Something that she would treasure and something that stems from my heart. She loves her cat …dearly. So I thought probably a photo of her cat might be it. No, I wanted something that is more than just a click on the camera and framing it. I decided to bring it one step further … I am going to do a painting of her cat. Not only she would keep it because she loves her cat but because I love her dearly. This will be my fist ever acrylic painting on canvas. 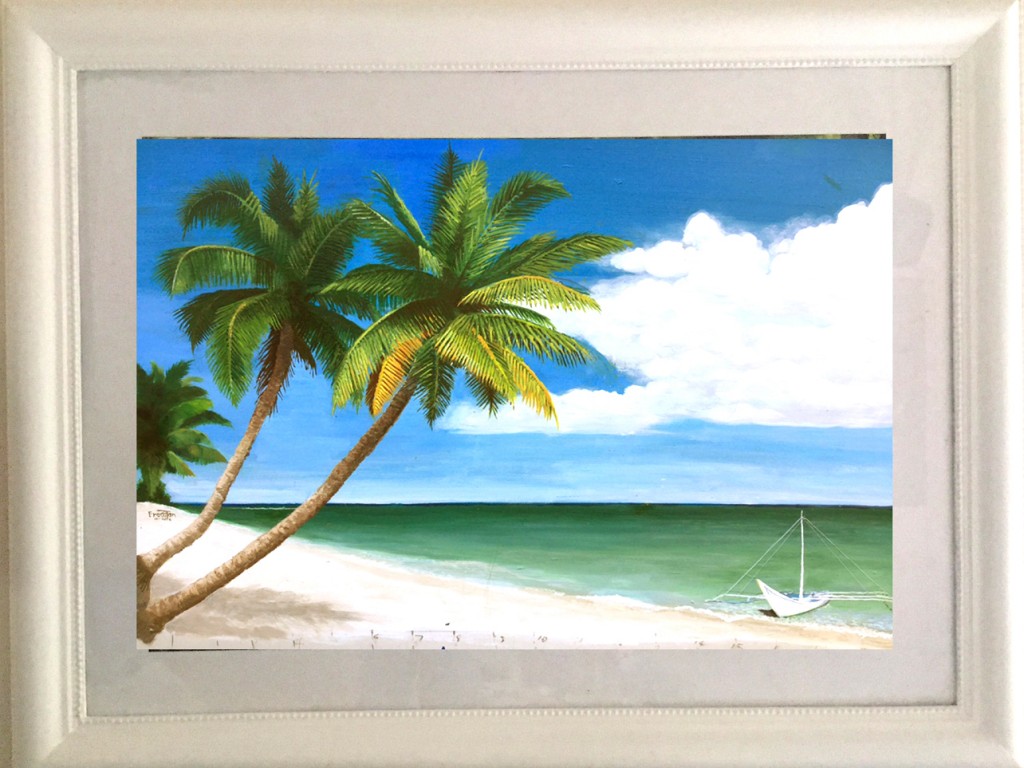 Boracay Beach – I grew up by the beach. Nearly drowned at least three times as a child trying to learn to swim. The beach has become my close friend, my companion when I am lonely, my soul mate when I need someone to talk to, my jukebox packed with unending music of waves crushing to the shore. my lover that unceasingly caress my face with gentle breeze. Its been a decade that Have not visited a beach. The closest beach to where I now live would take at least a 12 hours drive. I miss the beach so much that I decided to paint one of the beach that I had been. 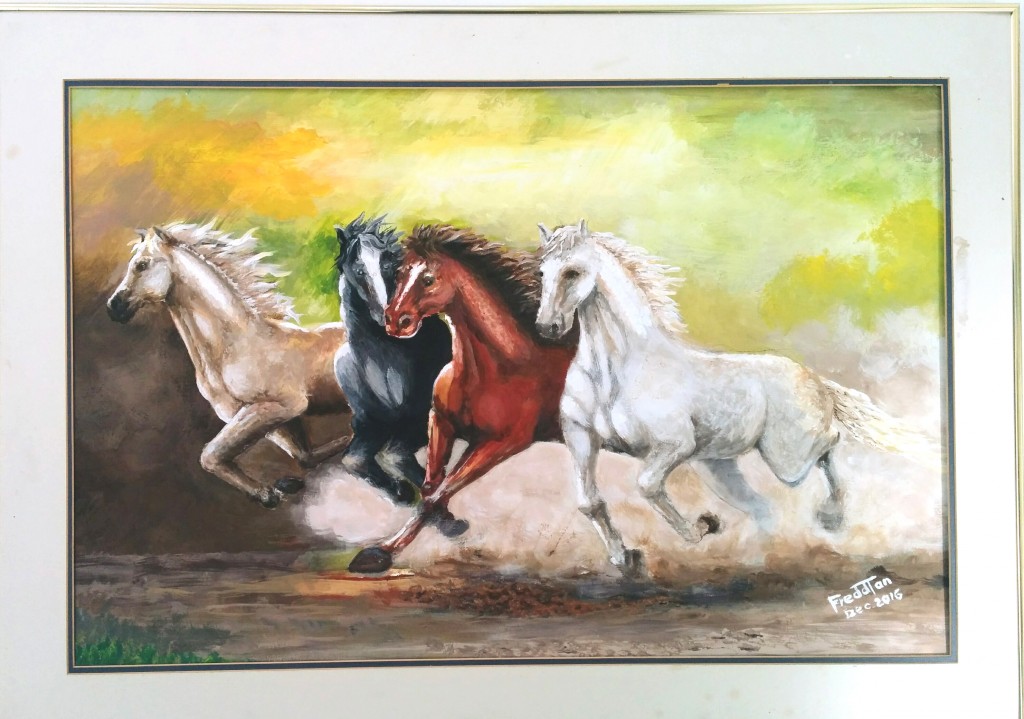 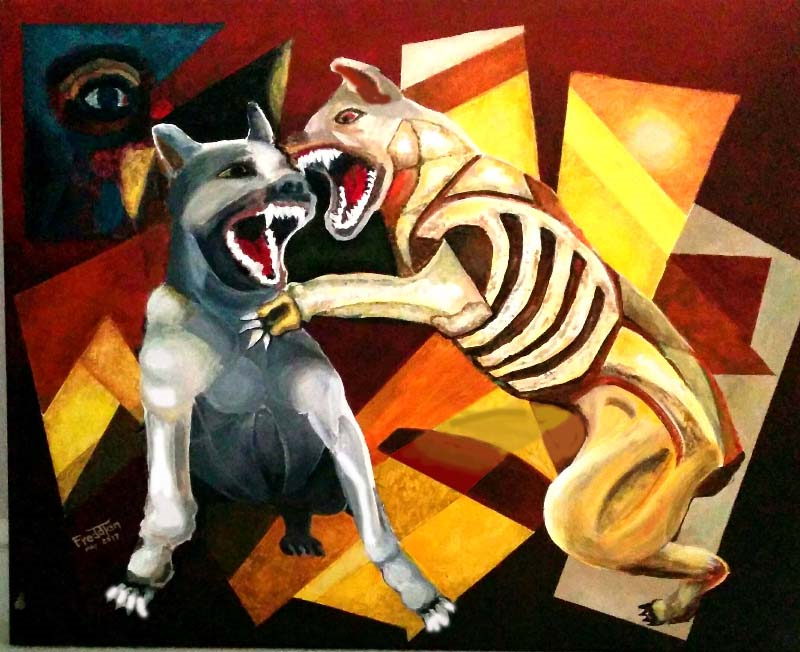 We had 2 dogs. All that I can remember now is that they continually fought with each other. I was taking a picture of my family one morning. There they came running fighting again that when I clicked the camera they were right in front of me at each other throat stealing away the scene.  Envy … jealousy… animal instinct ?  Is that why they fought. They wanted our attention all to themselves. They just can’t bear the thought of sharing with the other. Remind me of Cain and Abel.
The eye? You decide.

Fascinated with horses, their strength, swiftness, fearlessness and loyalty makes them an ideal companion for warriors. In Chinese zodiac sign, those born under horse year are characterized to be flexible. They tend to be stubborn when it comes to their own ideas. They are also incredibly patient when it comes to hearing out what other people have to say. They favor straight forward and blunt conversation. and yet tend to avoid starting up any unnecessary trouble. They are also quite capable of resolving conflicts. They are some of the most favored members of society; and though they don’t often aspire greatness they often time received compliments and adoration of their friends.
Some trust in chariots and some in horses, but we trust in the name of the LORD our God.   psalm 20:7 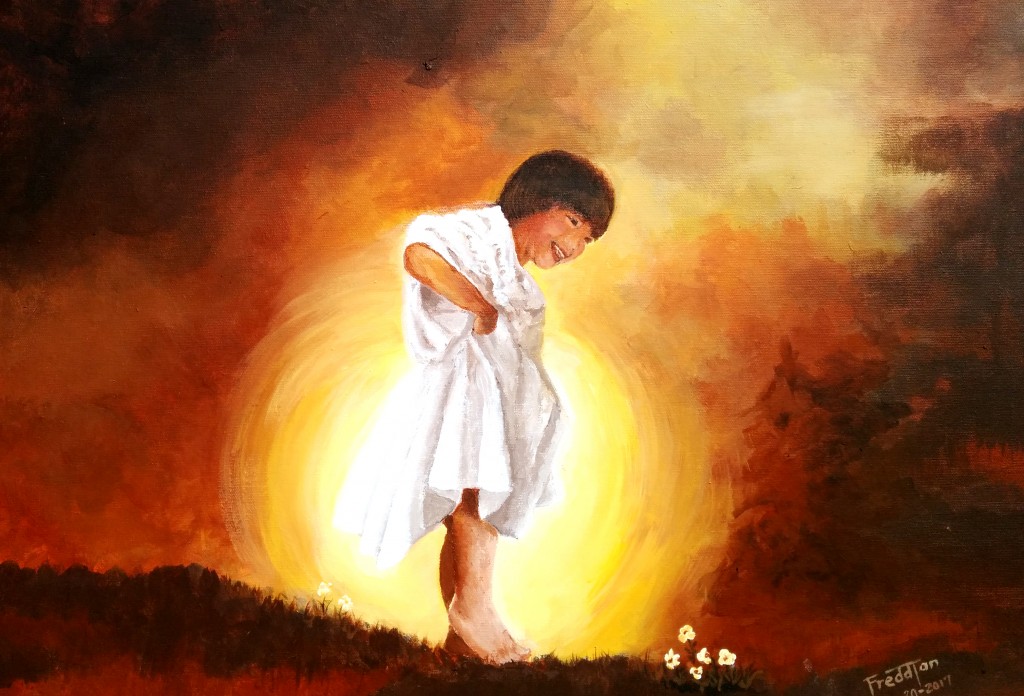 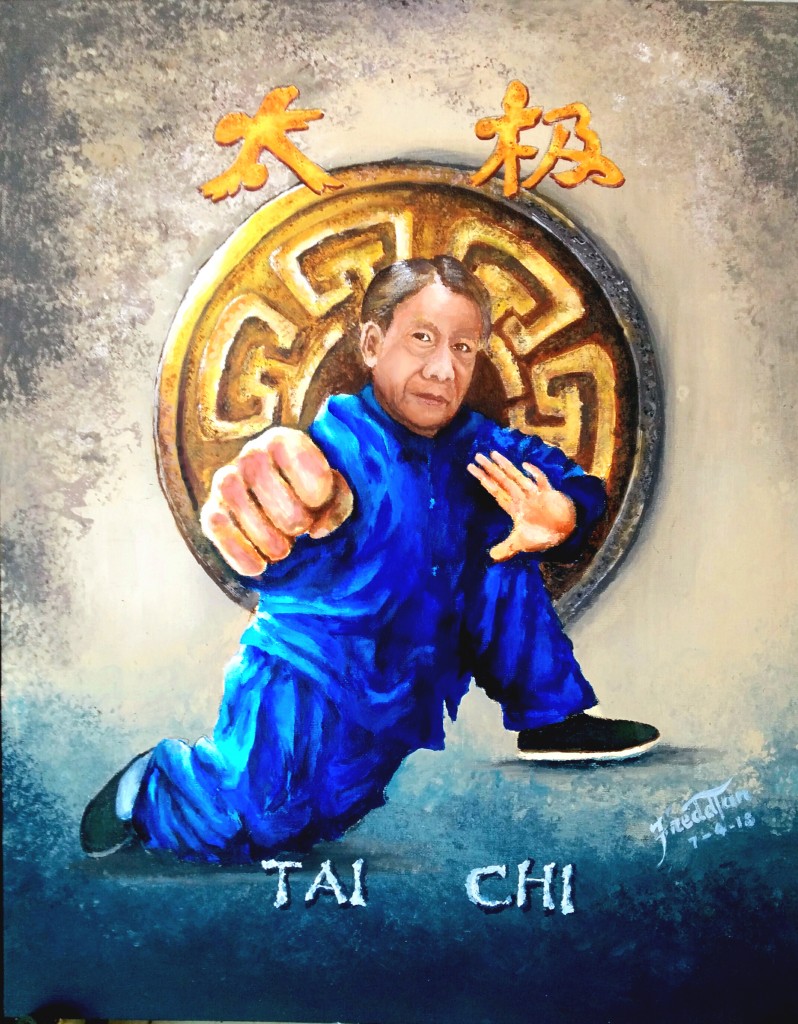 I am always fascinated with Kung Fu moves. More on the artistic forms rather than the fighting stance. In the same appreciation with acrobatic gymnastics, modern ballet, Broadway dance and sculpture arts. Ancient Chinese practice of Tai Chi can be put in the same artistic category. This self portrait is a depiction of a part of who I am. 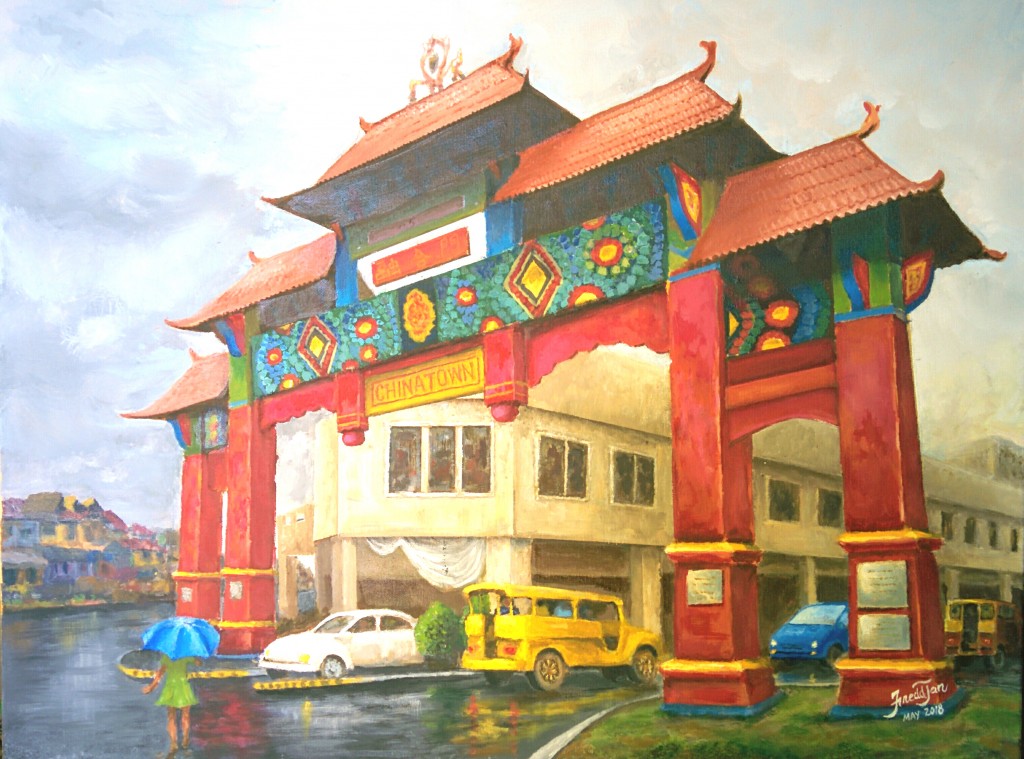 China town gateway – Davao City, Philippines. The gateway was not there yet when I grew up. Places, people and things change all the time. Seems to be a permanent event in life. Felt a little bit uncomfortable as I paint this with new things that comes between nostalgia and now. Old and new forms a part of my identity. 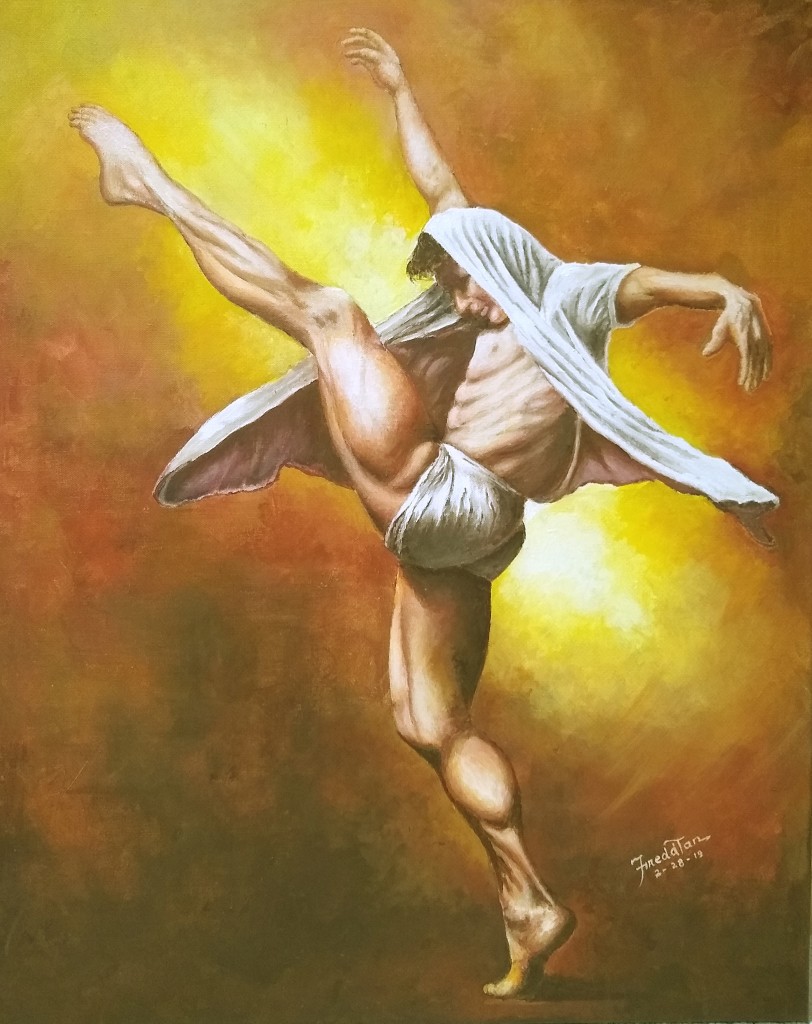 In my effort to communicate the principle of stretching and relaxing in my TAICHI class, I decided to do a painting to illustrate how our body coordinates every fiber of our muscles even just to do a simple movement. The still image in the painting is not moving but clearly the man is in motion. Depicting the “stillness in motion” of Taichi executed aesthetically with harmony and balance. 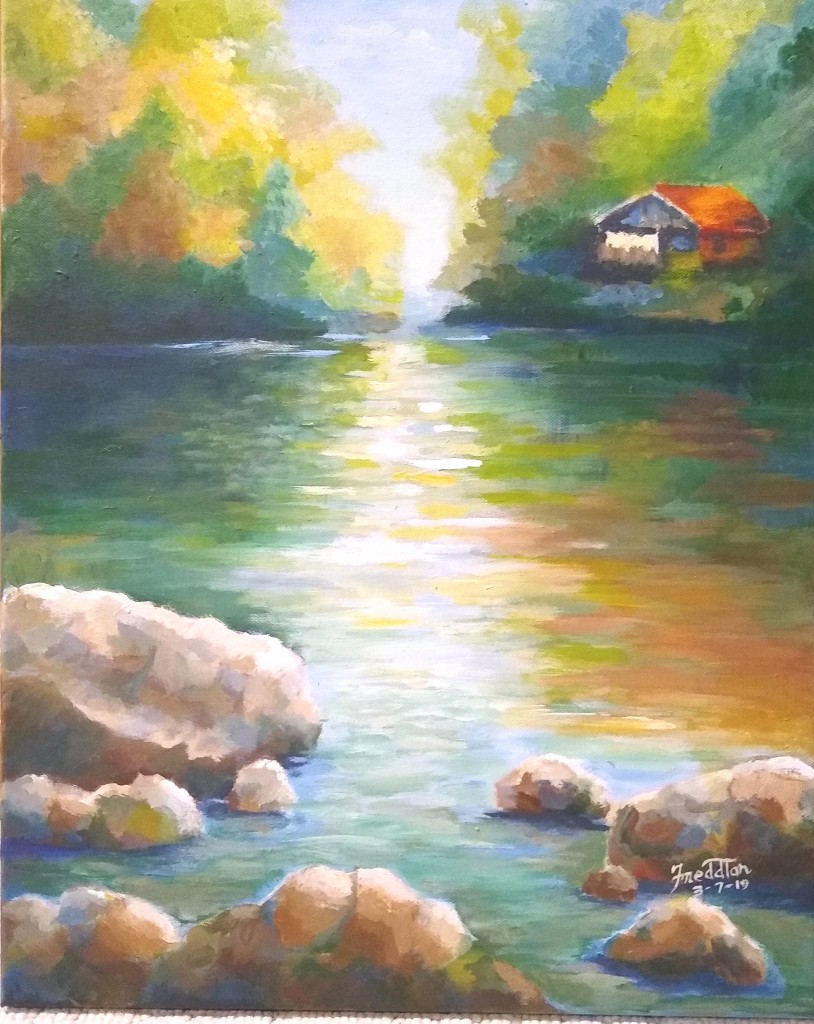 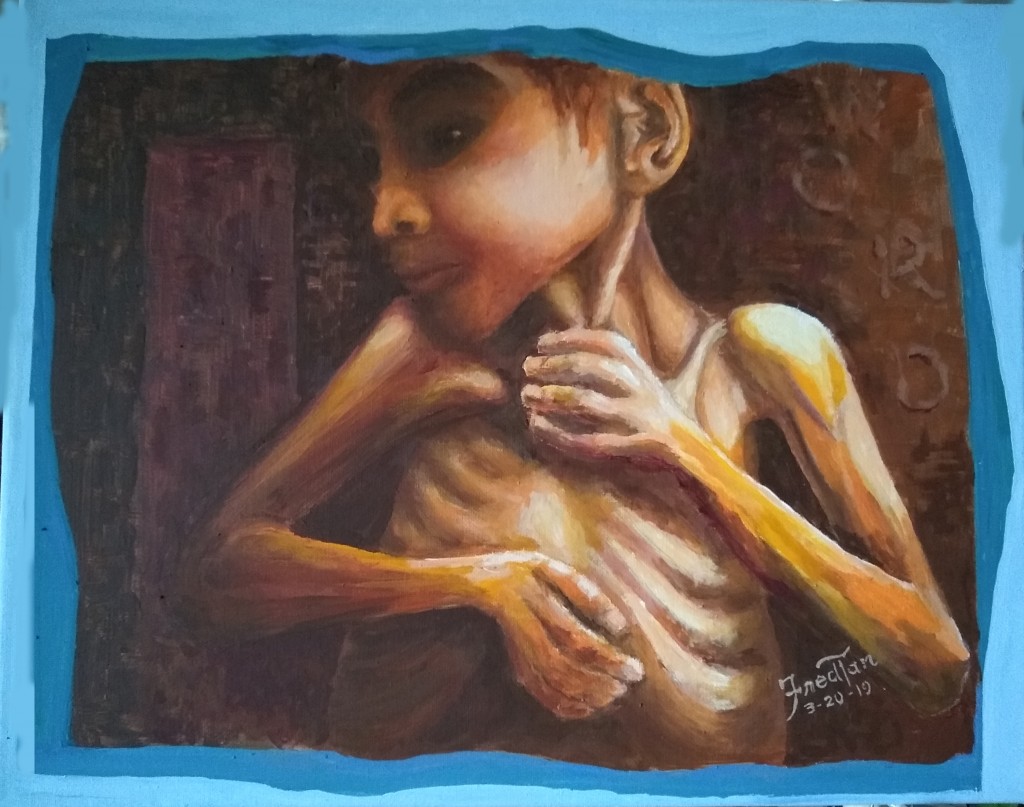 Amos 8: 11 “Behold, the days are coming,” declares the Lord God, “when I will send a famine on the land— not a famine of bread, nor a thirst for water, but of hearing the words of the Lord. 12 They shall wander from sea to sea, and from north to east; they shall run to and fro, to seek the word of the Lord, but they shall not find it. 13 “In that day the lovely virgins and the young men shall faint for thirst. 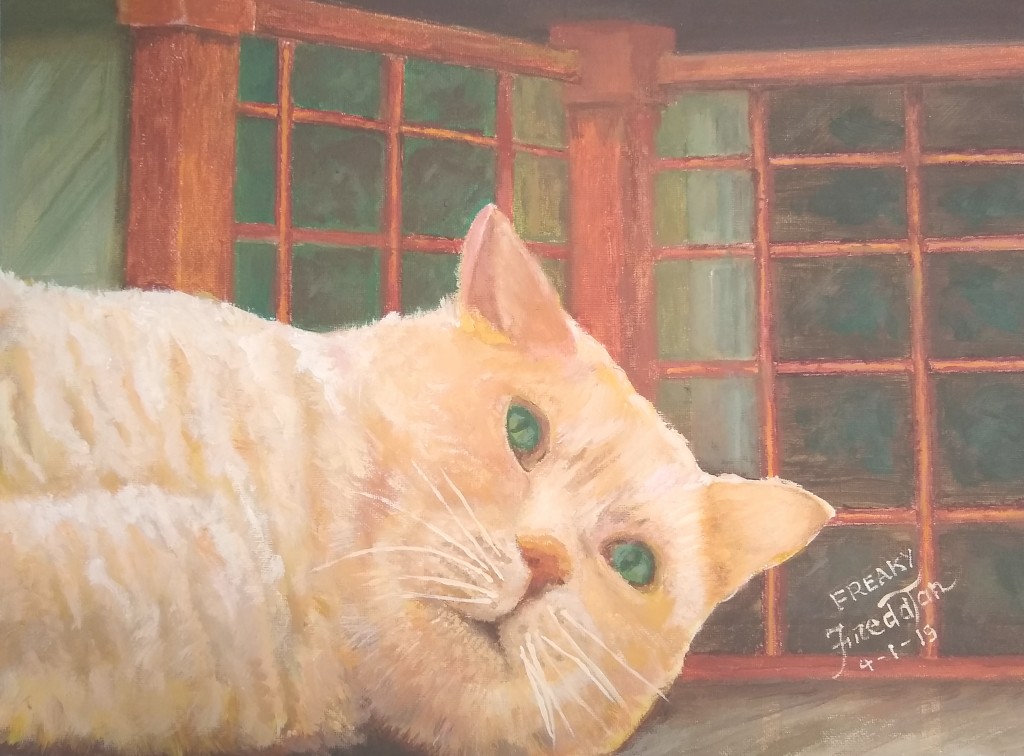 White and freaky – that’s his name. My daughter asked me to paint another picture of him.