Browse: Home   /   ENCOUNTERING A STRANGER AND…

ENCOUNTERING A STRANGER AND…

freddtan / March 30, 2015 / Comments Off on ENCOUNTERING A STRANGER AND… / Journal, Penpoint 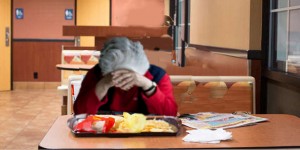 ENCOUNTERING A STRANGER AND OFFERING HOSPITALITY ..
by Pastor Steve Bucy   03/12/2015

As I departed from our all-staff Akron prayer meeting, I decided to drive to the nearby Burger King and get a breakfast sandwich and a senior coffee. Upon arrival, I decided to go inside, sensing that I needed to hear a further word from God. So I purchased my food and sat down at the very tall table and the newly remodeled uncomfortably tall chair and listened to the morning news on the Fox network. Leaving behind that uncomfortable chair for the regular booth seat, I began to eat my croissant and read from Genesis 18.

Meanwhile, a woman had come in alone and was sitting two tables away from me. She suddenly got up and came over with her urgent request: “Please may I borrow your phone to call my landlord?” Now I had been in this East Market Street restaurant many times over the course of the years. It’s the kind of place many come to in the early morning hours to hang out – nurse a cup of coffee to stay out of the cold and off the street, or to meet fellow strugglers in life to pour out their complaints, talk about news headlines, and curse God for their lot in life. Often they are sizing up the other customers who come in and unknowingly become the innocent lambs led to the slaughter by listening to polished stories of hardships. The emotional scams are given for one ultimate purpose – to become the targeted victim of assault and pitying this poor soul to the tune of extracting several dollars from your wallet – or at the very least, digging several coins from your pocket to get their day off to a good start by helping satisfy the insatiable addictions driving their lives.

I had just met this woman and did not ask her for her name, but she gave it to me nevertheless. “Pauline,” she said. I stood close by as she used my phone, making sure she didn’t dash out the door with it or access some vital piece of information to use later. She spoke to her landlord about her “urgent business” – informing him that she was sending two representatives to her building with the key to care for her most prized possessions and only family, i.e. her two cats. And would he please let them in. Yes, she lived in the low-income housing unit nearby.

After finishing her call, I quickly retrieved my phone, retreating back to the solitude of my booth and my “quiet time” with God. Just a few more minutes digesting the story of Abraham and his extending his rich and welcoming hospitality to three stranger who just suddenly showed up to interrupt his afternoon siesta retreat from the burning heat of the day.

And now here was Pauline interrupting once again – desiring to use my phone again since she had forgotten to convey some critical piece of information about the ongoing care of her two cats. This time I emerged from my cocoon and invited her to come and sit at my table, welcoming her to use my cell phone again. She spoke shortly and urgently once more to her landlord. But after finishing her call, I sensed she wanted to converse more and I obliged.

Now, face-to-face, Pauline engaged me quickly by rehearsing the major events of her life – never being able to have children due to an early trauma and hysterectomy – ongoing problems in life with bi-polar disorder – at least 12 consecutive years of involvement with AA due to alcohol and drug addictions. She spoke of her early life, too – growing up in a “good neighborhood” – attending Firestone High School but dropping out in 10th grade to follow the drumbeat of the peace movement of the late 60s. Yes, she became a hippy!

All I did was just listen as she poured out her heart. And I really did listen! It seemed like just a few moments ago I was talking to God in our staff prayer, saying: “Speak, Lord, for Your servant is listening!”

Then she poured out her present concern – the fear and anxiety she was experiencing was tatooed to her wrinkled face. It was cancer – of the most personal type and the doctors want to intervene with their surgical knives. She’s debating whether to go in for another MRI. Maybe she should just let it all go and just live out her remaining days – maybe a surgery would be too much – and what about her cats? I sensed she felt they were of greater value than her own life to her. Maybe she just didn’t feel she was worth much.

I opened my heart to share my cancer journey with her. She was caught off guard. This man in his suit and tie – what could possibly go wrong in his life? And yet I spoke of God’s care for me using good doctors to remove my tumorous cancer and attack the cells that had invaded my lymph nodes via chemotherapy. I spoke of the doctor’s human limitations – of sending me home after several months of hospitalization – having done their best, but having quickly run out of medical options and all human hope for me.

And then I spoke about Him – the One in whom we always hope and have hope and is our Blessed Hope – the only one who truly is in charge of our lives, our future days, and our eternal well-being. That compassionate One who loved her and valued her life so highly and of the great lengths to which He was willing to go to save her – that included death by crucifixion on a cross. His desire to rescue her and love her and to be her help – to shepherd her through this crisis and carry her like a little lamb close to His heart.

Finally I asked her if I could pray for her. I asked permission to take her hand and there on that restaurant bench in the midst of the busyness of people’s lives moving all around us, I took her on a journey to heaven with me – right through the gates of heaven and into the very Holy of Holies to the presence of God her Shepherd and the Lamb. It was not a quick “Lord Jesus help her” prayer, but we stayed some time in His presence – talking to God like precious members of His family – like friends – just as Abraham spoke to Him before interceding for Sodom – like Moses and Elijah speaking with Him as friends on the Mount of Transfiguration about His coming cross and the exodus about to take place shortly. As I opened my eyes again, I saw her face staring into mine and her eyes were pouring out tears. Somehow, in the midst of my designated “quiet time” with God, He broke through and came and touched a wounded woman’s heart as only He can do – a woman who simply and desperately needed a listening ear and a prayer.

And out of the wonder of that God-moment, Pauline surprised me when she said: “Would it be okay if I prayed for you?” And then she talked to God, pouring out praises to God in Jesus, for this stranger who showed her kindness. She thanked God over and over again – for her life, her loved ones, and especially her cats. When she finished her simple yet most beautiful prayer, asking God to pour His blessings upon my life, she opened her eyes and must have been surprised by the tears streaming down my face. We quickly said our goodbyes and she thanked me one final time. I assured her I would pray further for her. And as I pulled out of the lot, I could see her smiling face looking out that Burger King window – flashing me with her peace sign. I think she really meant it.

← Water On Earth Predates the Birth of Sun
The Right Man For His Time …by Rev. Budd Sprague →